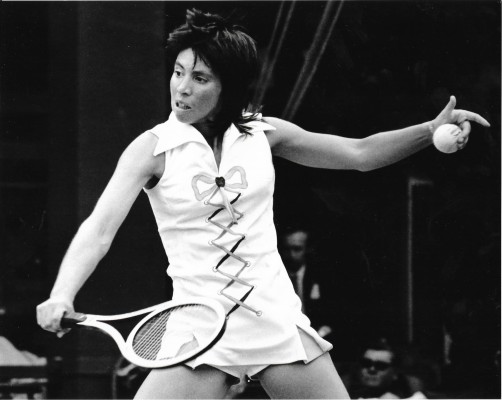 Rosie Casals: was born and raised in San Francisco and learned to play tennis on the public courts at Golden Gate Park when she was about 8 years old. She attended George Washington High School and graduated in 1966. She rose to fame in the 60’s and 70’s entering the U.S. Women’s top 5 in 1964, where she remained for 11 consecutive years. She is a 7 time Wimbledon Doubles Champion winning 5 women’s doubles with Billie Jean King and 2 mixed doubles titles with Ilie Nastase owning a total of 12-time Grand Slam doubles titles. Rosie was the singles winner of the first ever Virginia Slims tournament in 1970, in Houston, Texas and one of the Original “9” who signed a One Dollar contract with Gladys Heldman in defiance of tennis’s governing body the USTA. She along with Billie Jean King fought for equal prize money for women and were one of the founders of the Women’s Tennis Association in 1973.

Known for her her acrobatic and athletic style of play, Rosie also thrilled the crowds with her Teddy Tinling Sequence and velvet tennis dresses she accented with her colorful headbands. She is the winner of the first Family Circle Cup in 1973 earning $30,000, the highest purse ever awarded to a female or male athlete and first tournament to carry women’s tennis live on NBC.

She was the color commentator with ABC’s Wide World of Sports Broadcaster Howard Cosell during the “Battle of The Sexes” in 1973 at the Houston Astrodome and predicted Billie Jean’s victory score. Rosie was inducted into the Marin County Hall of Fame in 1995, the International Tennis Hall of Fame in 1996 and the Bay Area Sports Hall of Fame in 2003.

Rosie established Sportswoman, Inc., in order to remain connected to tennis and her contemporaries like Billie Jean King, Martina Navratilova, Tracy Austin and Chris Evert. In 1983 Rosie established the Women’s Tennis Classic Tour and the following year added men to become The Tennis Classics Tour. Sportswoman branched out to include charity tennis events, corporate outings, clinics, exhibitions, speaking engagements and anything having to do with tennis.

Rosie continues her entrepreneurial ventures when she and tennis professional Tory Fretz established the Love & Love Tennis Foundation in 2015 to help promote junior tennis in the Coachella Valley. Rosie moved from Sausalito, to the desert in 2001 and has been a mainstay in helping develop junior tennis in the desert. (www.lovelovetennisfoundation.com)